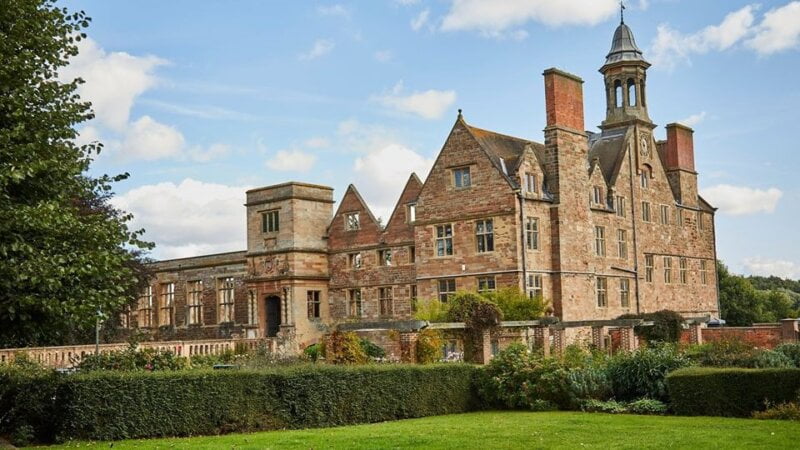 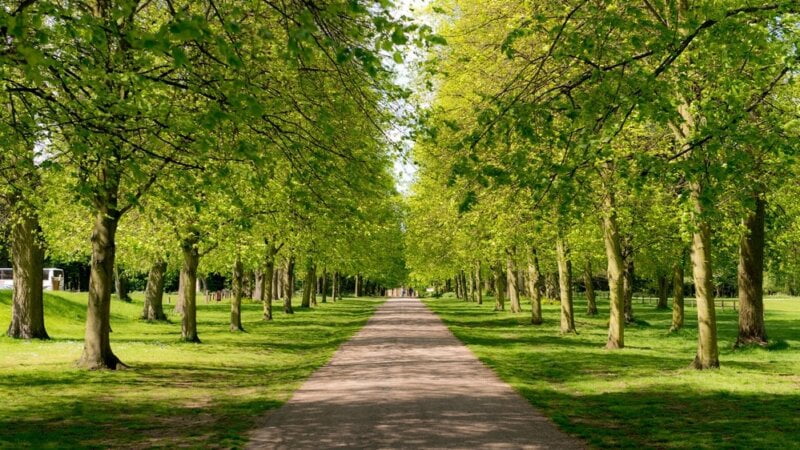 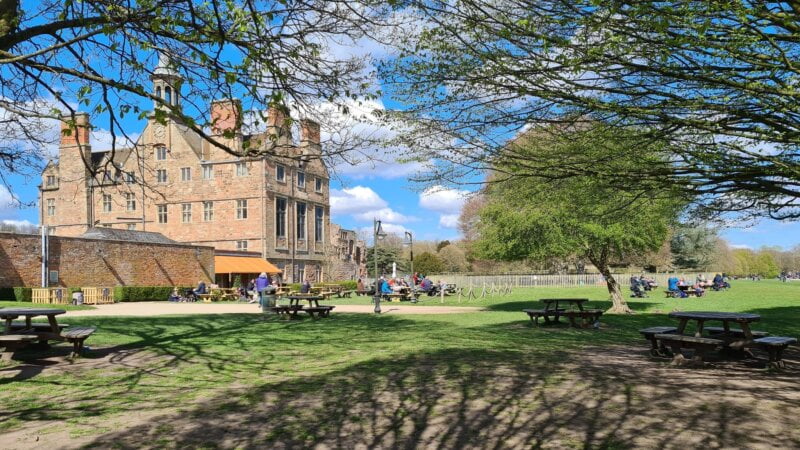 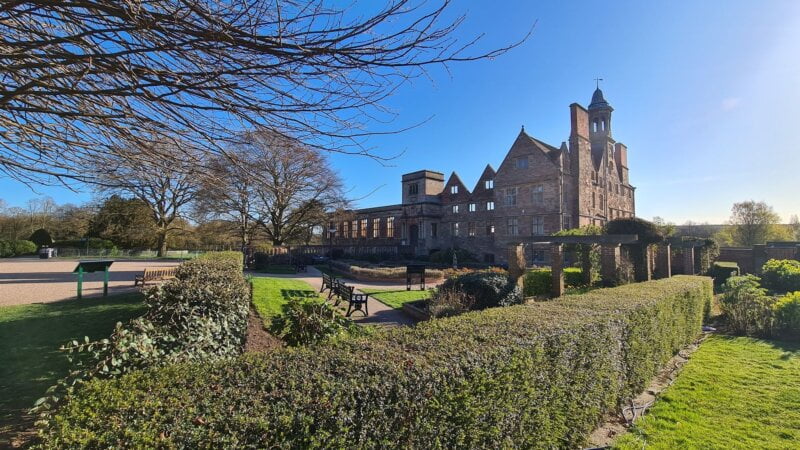 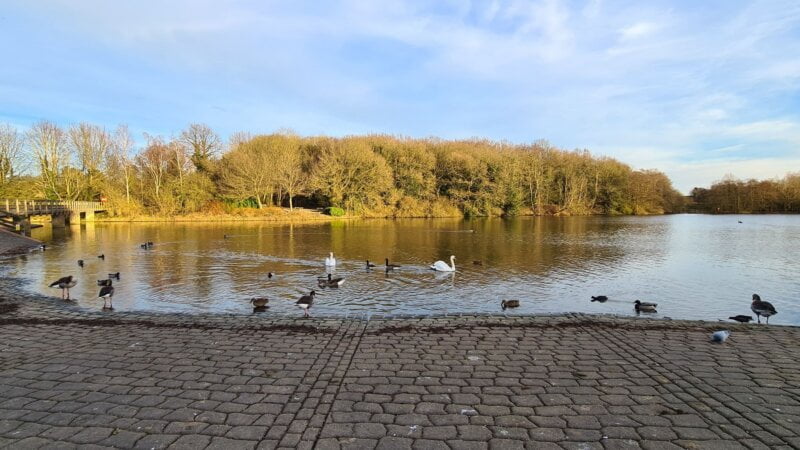 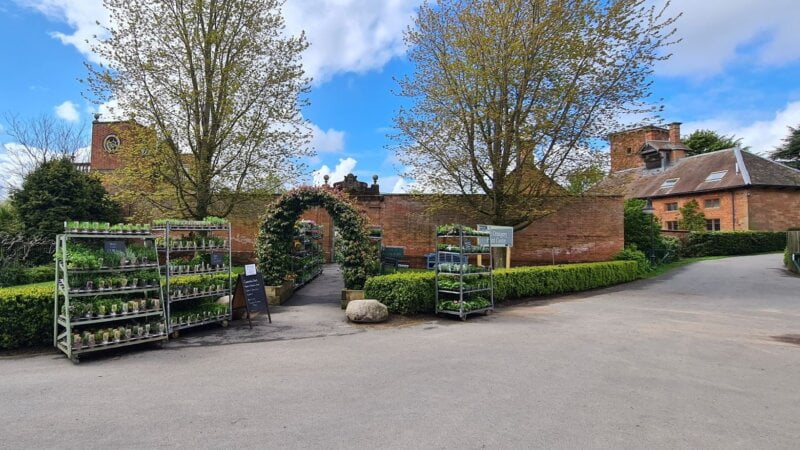 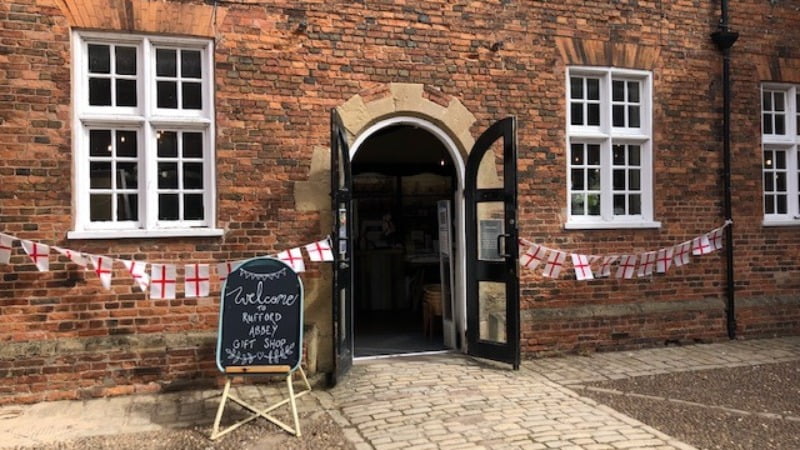 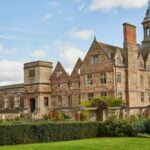 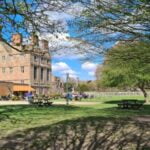 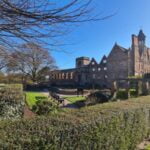 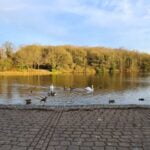 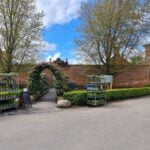 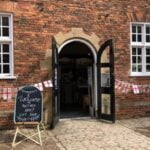 Founded as a Cistercian monastery in the 12th Century, Rufford Abbey came into being about the same time that Robin Hood may have roamed nearby Sherwood Forest.

When Henry VIII closed the English abbeys, its buildings, watermills, fields and farms were granted to George Talbot, the Earl of Shrewsbury. Later, it passed by marriage to the Yorkshire Savile family, and grew from a hunting lodge into a magnificent country house.

On the eve of World War II, Rufford Abbey was sold, and passed through the hands of various owners. Requisioned for wartime use, it housed cavalry offices, a tank regiment and later Italian prisoners of war. Stripped of its fine interiors, furnishings and land, by the late 1950s it languished. Wartime damage, coal mining subsidence and neglect left the Abbey and its grounds in a sorry state.

In 1957 Nottinghamshire County Council bought the house and the remains of its gardens, later opening them as a country park.

Though sadly, most of the building had to be demolished, the original abbey undercroft, the Jacobean wing and many historic garden features remain for today’s visitors to explore.

The area surrounding Rufford has been inhabited since prehistoric times. At Creswell Crags – a limestone gorge near Worksop- a discovery centre tells the story of Ice Age hunters who sheltered in its caves 40,000 years ago.

Local forests of oak, birch and lime were first partly cleared by Neolithic people. However, areas of ancient oak and birch woodland still remain. Three miles away at Sherwood Forest Country Park you can walk in Birklands and Bilhaugh. Pollen analysis shows that they were woodland right back to the Ice Age.

By the time of the Romans (around 120 AD), we have mention of a Roman settlement near Ruchford, Rutherford or Runford. The town of Southwell, not many miles east of Rufford, had a Roman villa. You can still see part of its mosaic floor under a pew in Southwell Minster. It’s believed that a Roman road passed through the area from Oxton, north of Nottingham, to Blyth in what is now south Yorkshire.

The name “Rufford” comes from the Old English or Saxon and means “rough ford.” Though it’s often assumed this is the ford that modern cars now splash through on Rufford Lane, in fact it was probably another ford to the east of the present day park. Old estate maps show a watermil there, on the stream which was later dammed to become Rufford Lake.

The first recorded owner of Rugforde or Rumforde, according to the Domesday Book, was “Ulf, son of Suertebrand” – a Saxon chieftain. But everything changed when the Normans invaded England. King William the Conqueror gave Ulf’s estate to his nephew, Gilbert de Gant (Gilbert of Ghent.)

The grandson of Gilbert de Gant, (confusingly, also called Gilbert) was Earl of Lincoln. He gave land at Rufford to the Cistercian order of monks in 1146. In the middle ages, it was believed that prayers would help the souls of the dead to reach Heaven. So giving land and gifts to a monastery was a kind of spiritual insurance policy!

The Cistercian order was a spartan and austere order. St Bernard of Clairvaux was one of their founding fathers. The movement started in Citeaux in France, and spread all over Europe. Fountains Abbey and Rievaulx Abbey in Yorkshire are two of the best known Cistercian monasteries in England. Their ruins can still be visited today.

Twelve Monks from Rievaulx Abbey – led by an abbot called Gamellus – travelled down to Nottinghamshire to create a “daughter house” on their newly acquired land. They immediately set to work creating an abbey church, and probably diverting local watercourses for the water they would need for mills, washing and fulling cloth. The Cistercians believed in making or growing almost everything they needed to survive.

In 1156 Rufford received its official blessing from Pope Adrian IV, and various charters in the following years saw the abbey expand its land. It is said that the villagers of Rufford, Cratley, Grimston and Inkersall were evicted to make way for the abbeys farming activities. Some were probably resettled in a new village called Wellow, just outside the abbey estate. Medieval records relate that there were frequent disputes between the Abbot of Rufford and the men of Wellow, usually over the rights to wood from a local forest.

It is thought that the construction of permanent stone buildings of Rufford Abbey was well underway by the 1160s, although work may well have continued on and off for almost a century. Local craftsmen and stone were both used to construct the building.

Find out more about the life of the monks who lived at Rufford in our on-site exhibits.

When Henry VIII famously broke away from the Church of Rome in 1530, he was eager to stake his claim to the assets of the great Catholic religious orders. One of these was Rufford, which by 1534 was worth £176. In 1536 he appointed the Commissioners Legh and Layton to find sufficient evidence to allow him to close down the abbey.

Among the “disgraceful offences” they found at Rufford was the claim that the abbey possessed some of the Virgin Mary’s milk. They also alleged that the Abbot, Thomas of Doncaster, had broken his vows of chastity with at least two married and four single women, and claimed that six of the other monks were of “disgraceful character.” Following this a Royal Commission closed Rufford Abbey and the lands were granted to George Talbot, 4th Earl of Shrewsbury.

It was while owned by the 6th Earl, another George Talbot, that the transformation of the old abbey into a fine country house first began and under the guidance of the 7th Earl new wings were added onto the north and south ends of the lay brothers’ wing of the old abbey, forming some of the country house we still see today.

In 1626 the Rufford estate passed to Sir George Savile and his first wife, Lady Mary, who was a sister to the 7th and 8th Earls of Shrewsbury. The Saviles were a long-established and landed family whose seat was Thornhill Hall near Huddersfield in West Yorkshire.

The family supported the Royalists during the English Civil War, living up to their family motto to “Fear God and Honour the King” and Charles I visited Rufford in July 1642, shortly before raising his standard at Nottingham on August 22nd, which signalled the start of the war. The family prospered under the restoration of the monarchy and continued to enhance and develop the estate.

Throughout the 18th and 19th Centuries, the grounds were continually expanded and developed. In 1750, for example, the 8th Baronet dammed the stream to the north and created the lake. Not only did this enhance the grounds, it also provided power for his new corn mill, now known as Rufford Mill. In 1837 the eminent Victorian architect Anthony Salvin was hired to undertake a thorough re-design of the house, much of which can be seen today.

Rufford made rough-cut wooden coffins for the dead of the First World War, but this war also heralded the beginning of the end for many large country estates, and Rufford was no exception. The estate suffered from rising taxes and wages and reduced income from farm rents, so that by 1938, the trustees of the young 3rd Baron were forced to sell the estate.

The estate, house and contents were eventually taken over by the Army in 1939 during the Second World War and the Leicestershire Yeomanry, 6th Cavalry Brigade were stationed there, arriving as horse-mounted troops, and leaving as motorised artillery. About 20 army huts were constructed and these later housed Italian prisoners of war.

By 1949 the house was in a poor state of repair and the Government announced that in the event of demolition, the 12th Century parts of the abbey, including the crypt, must be preserved at all costs. In 1952 Nottinghamshire County Council decided to purchase the Abbey and about 130 acres of land around the house and in 1956, despite some public outcry, a necessary controlled demolition of the Abbey’s upper floors, the 17th Century north wing and the 18th Century east wing was started and completed two years later.

In 1969 a park ranger service was set up and the site officially designated a Country Park. After years of neglect the future was finally looking brighter for Rufford Abbey.